Pat Tillman Scholar recognized for his work with the Navajo Nation

Editor’s note: This story is part of our Salute to Service coverage, Nov. 1–11. Learn about the schedule of events.

Ryan Benally knows what it’s like to do without the modern necessities of life.

There were portions of his childhood on the Navajo reservation when his family didn’t have running water, indoor plumbing or electricity.

As an Arizona State University graduate student and a leading voice in his tribe, he has been able to give back to his community, and frequently does.

It’s part of why he was selected as a 2022 Tillman Scholar.

“I was really surprised I was selected because I hadn’t known about the Tillman Scholarship until a few days before I applied,” said Benally, a graduate student in the Ira A. Fulton Schools of Engineering. “When I discovered what the Tillman Foundation was all about and that I was joining a group of other scholars who are very involved with their communities, I was really impressed. And still very surprised.” 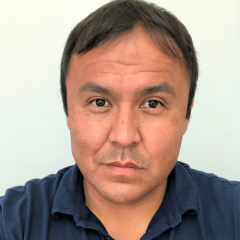 Benally shouldn’t be. His track record speaks for itself. He has served his country and his community with distinction, said the head of the Pat Tillman Foundation, who bestowed the honor on Benally in late June.

“We choose our scholars not as a reward for the service they’ve given, but as an investment in their potential to lead through action and grow within our community,” said Dan Futrell, himself a 2011 Tillman Scholar. “From his time in the Marine Corps to his efforts to invest in his community in the Navajo Nation by improving infrastructure and basic services, Ryan doesn’t just demonstrate that potential — he inspires it in others. We’re proud to call him a Tillman Scholar.”

Tillman Scholars are identified by the foundation as “remarkable military service members, veterans and spouses, empowering them with academic scholarships, lifelong leadership development opportunities and a diverse, global community of high-performing mentors and peers.”

The foundation receives close to 2,500 applications a year for its scholarship. This year, there were 60 scholars selected nationwide. Applications for the 2023 class of Tillman Scholars open Nov. 1.

The Tillman Foundation gifted Benally a $9,000 scholarship for his master’s degree program in the field of construction management and technology. He said he intends to use his education to help improve his community back home.

Home is Red Mesa, Utah, a small community of 8,000 tribal members that straddles the Arizona-Utah border. Like many communities in the Navajo Nation, it is mostly impoverished with a median household income of about $25,000 a year.

“There are families there who are still in need of running water and electricity,” said Benally, who serves as a vice chair with the Utah Navajo Trust Fund, which helps oversee the health, education and general welfare of the Navajo residents of San Juan County, Utah. “There was a time when our family didn’t have the resources needed to sustain, so I have that perspective growing up. When people don’t have running water or electricity, it can only inhibit their ability to recover from something like COVID-19.”

Despite some hard times, Benally said his family had it better than most. His father worked as a welder while his mother attended college. Even though they were busy, Benally said there was always time carved out for giving back, whether it was helping to feed families or assisting his mother and sister with literary events at the Bureau of Indian Education and public and charter schools.

“As a young person, Ryan always thought of others first and is a person of compassion,” said his mother, Rebecca, a retired schoolteacher and principal, and former San Juan County commissioner. She is now the health promotion director for San Juan County. “In the wintertime, with the assistance of his Uncle Gregory, he would help people that were struggling. They’d hand out knit caps and gloves to people — I guess you could call them homeless. He is someone who walks the talk.”

Benally attended Navajo Preparatory Academy in Farmington, New Mexico, which he said prepared him for college life. It also helped shape his mindset toward academics and personal success.

“It was a top-tier tribal school in terms of academics. It prepared us to understand what was expected of us in terms of work, the infrastructure of school, what it means to study on your own, and emphasized self-motivation,” Benally said. “The school also taught us that we weren’t investing in ourselves but ultimately our community. We knew that one day we would be back to improve the standard of living.

After Benally graduated from the University of New Mexico with a bachelor’s degree in business administration, the 9/11 terrorist attacks and Pat Tillman’s military enlistment motivated him to join the U.S. Marines in March 2002.

“That moment made me realize that it wasn’t enough to say, ‘I love my country,’” Benally said. “I wanted to protect and serve it. So, when that happened, it changed my idea of what it means to serve your community and serve your nation.”

In 2003, Benally was deployed to Iraq for Operation Iraqi Freedom. He provided security detail for military operations, clearing explosive devices off the roadways — considered one of the most dangerous jobs during that mission. Benally saw several fellow soldiers injured and killed.

“It changes your perspective what we have here at home,” Benally said. “We seem to take for granted our security … just to go out for a walk or going to the grocery store or to gas up your vehicle. It’s a way of life we enjoy as Americans that we should not take for granted.”

“The pandemic showed us that we don’t have enough people to educate the community about the benefits and programs the tribe offers and what they could possibly be eligible for,” Benally said. “All of the people who are trained in this program are 100% Native Americans. This is what my education has helped me provide for my community.”

And he’s not resting on his laurels. Besides, it’s not what Pat Tillman would have wanted either, Benally said.

“It’s really sad how Pat Tillman passed away, but his influence continues on because he demonstrated that there’s always a need for service, whether it’s in the military or in your community,” Benally said. “I believe that’s something he would want for all of us, especially as Pat Tillman Scholars. He showed me that it’s not what you say but what your actions are that truly makes a difference.”

Top photo: A bronze statue of Pat Tillman at the entrance of the Pat Tillman Tunnel at ASU’s Sun Devil Stadium. The statue was erected in 2017 and was created by an ASU alumna. Photo by Charlie Leight/ASU News